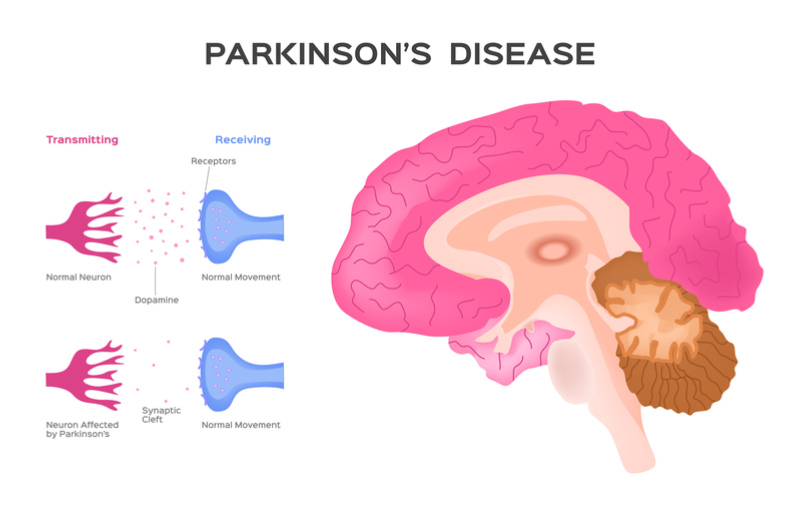 Parkinson’s disease (PD) is a medical condition and a nervous system disorder that is associated with movements of the body. The disease is chronic and progresses slowly and gradually, causing the symptoms to slowly worsen with time. Parkinson’s disease is a rather common disease that affects a large number of people.

According to statistics almost one million people are living with the disease in US alone. Being diagnosed with this disease is a bad news, primarily because the medical science neither knows the root cause due to which the disease occurs and nor does it have a cure to treat or delay the disease. The relief however that is there are a number of options both in terms of medications and surgical to treat the symptoms associated with the disease.

Parkinson’s disease with its slow and gradual development reduces the amount of dopamine that the brain produces, which in turn causes imbalance in the body also resulting in unsteady bodily movements. It is one of the most common diseases associated with the brain and is found in a large number of people.

A lot of research and intensive study is being put into the subject of Parkinson’s disease, however till today the cause of Parkinson’s disease are not known. A number of scientists have researchers have attributed certain genetic factors in combination with environmental facts to be causing the disease. The genetics and environmental triggers vary from person to person.

In a number of cases, genetics is known to be an important factor while in others factors like other diseases, environment or any such other events may cause risk of acquiring Parkinson’s disease. Ageing however is one of the most crucial reasons of acquiring Parkinson’s debase as the risk of the disease is about 2-4 percent in people above 60 years of age, compared to about one to two percent as in the case of others.

The triggers that cause the death of the cell neutrons in dopamine neurons, is a being studied by researchers and scientists. A number of people believe that it is not just one factor but a number of events or factors that come together to cause the death of dopamine cells. Researchers believe by understanding these combining events and factors perhaps the disease could stop from occurring.

The signs and symptoms of the Parkinson’s disease differ from one person to another. In some cases the symptoms may be so mild that they care barely be noticed. These are normally the early signs which are often left undiagnosed and eventually lead to deterioration of the condition.

Symptoms are often seen in one side of the body and worsen the functioning of that side in the long run. Even if the symptoms are later seen on both the sides, the one affected side continues to worsen more. Some of the primary symptoms that help in diagnosing Parkinson’s disease include:

Complications in Parkinson’s Disease Condition Can Impact Quality of Life

Lifestyle Changes Can Help in Better Management of the Disease

Parkinson’s disease can be life changing and dealing with the disease can be difficult for not only the patient but also the ones caring for the patient. The fact that the disease has no definite cure can be very devastating for a number of patients and that brings about a feeling of sickness in the patients. Once the patients have been diagnosed with the disease, they need to be in close touch with the doctor for getting relief on the various symptoms experienced. With the doctor the family and the patient’s family should work out the best treatment path that may suit all. While the treatment is on one side, there are a few lifestyle modifications that can be incorporated for better management of the disease.

Healthy eating: Although food may have little or no relation with treating Parkinson’s disease, there are certain foods which may help in relieving some symptoms associated with the disease. Foods that are rich in fibre and drinking lot of fluids can help in alleviating constipation for patients. Also eating a balanced diet helps in ensuring the patients get adequate nourishment that may delay other diseases from affecting the patient.

Exercise: Who does not the benefits of regular exercising? Exercising can help the symptoms of Parkinson’s disease particularly those related to movement from worsening. It is best to work close with a therapist so you do not over exert or strain your body. Swimming, yoga, walking are known to relax the mind and body that can help patients feel better with symptoms like depression.

Everyday activities: With slowed movement and loss of balance, doing everyday activities can be difficult for the Parkinson’s patient. Seek help from your doctor or caregiver to help yourself be as independent as possible. Of course when there is a point that you need some help to carry out with everyday functions, don’t shy away from seeking some.

Alternative therapies: Therapies like massage, acupuncture, Tai chi are known to help the patients relax. Acupuncture can be extremely helpful in relieving symptoms of pain.

Dealing with the Parkinson’s disease is never easy, but patience, love and care can improve the quality of life for the patient. Besides, family support can instill confidence also in the patient to try and fight the disease and lead a normal life to whatever extent he can.

How Storing Urine Can Help You With Your Urine Drug Test

Aarav Kashyap - October 28, 2018
0
Get the latest Health News: breaking health and medical news from the UK and around the world, with in-depth features on well-being and lifestyle.
Contact us: seo.mehra@gmail.com